Me in "Textiel Plus"

It was evening a few months ago when I received an e-mail from a Dutch journalist, asking me if I would mind being featured in a Dutch textile magazine. I was so excited when I realized the magazine was Textiel Plus.
While I was staying in the Netherlands two years ago, I happened to browse through a few issues of it. It is a quarterly magazine featuring contemporary textile art and artists. Even though I couldn't read the Dutch text, I was deeply impressed with the magazine, which is so up-to-date, eye-catching, and very professional. Secretly, I wished to be featured in it.
Two weeks ago, I received the winter issue with me and my dolls featured inside. I was so thrilled!!!
Now, finally, I can share it with you. The text was translated by Paul Tieman and edited by Irit Caspi (who has lately been helping me improve the English texts on this blog).
Now here it is:

The Sock Dolls and Sock Animals of Neta Amir

Neta Amir switched professions from fashion designer to doll maker. She makes her dolls using used socks. With the creation of a face, haircut, clothing, jewelry etc., their character and identity develop. After the dolls are created, Neta lets them take part in installation art and stories. 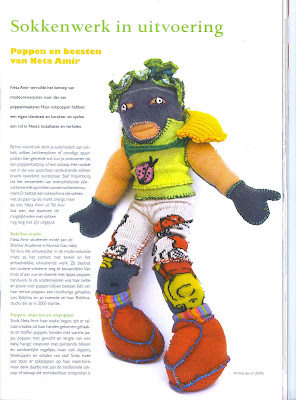 The word "sock" in Dutch (sok) almost automatically conjures images of foolish or feeble-minded individuals, a sack of marbles, or an unsafe place to keep your money. It can also be associated with the use of knitted socks to make puppets or sock monkeys. The pattern for a sock monkey for babies comes free of charge with brown socks from the American brand Rockford. The mystery of why socks disappear in the washing machine has inspired artist Stef Kreymborg to create a sock monument. And a sock factory sells socks not in pairs, but rather in threes. Yet none of these options for using socks is similar to the way Neta Amir from Tel Aviv uses them.

Neta Amir studied fashion design at the Shenkar College of Engineering and Design. While working as a designer in the fashion industry, she missed the feel of handmade items. She decided to choose another creative path in life. Since Neta was a child, she has been busy with pieces of fabric, dolls, and handicraft. During the years in which she attended Shenkar College, her love for dolls did not diminish. One of her first dolls, a red-haired crocheted figure, was named Bobilina, and Neta named the studio she started up in 2005 after this first doll.

Since Neta opened her studio, numerous handmade creations were born, ranging from crocheted and fabric dolls to dogs with warm coats, baby-sized dolls, “hairy” creatures with pensive expressions in their eyes, and touching birds, but also slippers, tea cups, and bowls made of fabric. During the last two years, sock dolls have also been a part of her repertoire, but don't think her work has anything to do with the traditional sock doll or sock monkey, which is unmistakably made from striped or checkered socks, or socks made from goat's wool. In one of her first sock dolls, which is better described as a sock dog, the heel of the sock is recognizable, but Neta has developed such a characteristic method and style, that only avery careful study of the dolls reveals the use of socks. 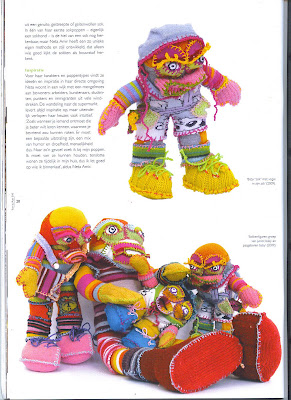 For her characters and type of dolls, Neta finds many ideas as well as inspiration in her immediate environment. Neta lives in a neighborhood that houses many different kinds of people: factory workers, artists, students, rockers, and immigrants from various countries. The walk to the supermarket offers a lot of inspiration, but, ultimately, her choices are intuitive. “Like when you meet someone whom you'd like to know better and you can become friends with. There has to be a certain atmosphere, a mix of humor and sadness, some humanity. I look for this kind of feeling while making my dolls. It is necessary to love them; they are temporarily living in my home, so I'm careful to which characters I open the front door,” explains Neta. 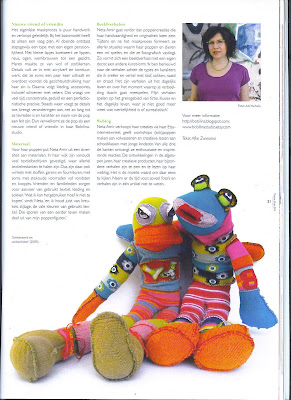 Making the dolls is a process of pure handwork, and is not hasty. When working on the first outline, Neta has only a rough idea. While working, she develops a typical character. With small pieces of fabric, she forms lips, nose, eyes, and eyebrows into a face. Hair is made of wool or fabric. Details are added with acrylic paint or embroidery. Often, these details are added several times before the doll's facial expression is satisfactory. Then come clothing and other accessories, including shoes with laces. This all takes time, and requires concentration, patience, and a perfectionist attitude towards the work. Neta adds or changes details until she is completely satisfied with the outcome, chooses a character and name for the doll, and can now welcome a new friend to Bobilina Studio.

Neta Amir uses diverse materials for her dolls. In her neighborhood, where many textile companies have been traditionally established, all kinds of fabric scraps can be obtained. There are also shops that offer fabrics, yarns, and notions, sometimes with old stocks of finds and bargains. Friends and family members provide a supply of used fabrics, clothing, and socks. "I don't need to buy what I can reuse," says Neta. "And I love the creases, wear and tear, and faded colors of used fabrics. Those traces of an earlier life are part of my dolls' characters."

Neta Amir does more than create dolls that demonstrate her craftsmanship and originality. During and after the process of creation, she makes up many situations where her people dolls and animal dolls play a role, which she then photographs. This creates a story in pictures, with its own setting – another artistic discipline. “I am curious to know the stories of the characters I create and tell with fabric, socks, needles, and threads. Stories picked up from daily life, and about the moment your imagination takes part in it; the crossover between fiction, illusion, and real life, where you cannot recognize exactly what is real and what is surreal.”

With her Bobilina Studio, Neta Amir is following her heart. She sells her creations on her online Etsy shop, organizes (sock) doll making workshops for adults, and conducts artistic classes for young children. From all these three directions, she receives enthusiastic and inspiring comments. The developments (in her work) from the last few years, her creative items, and her unique stories can be seen and read on her blog. It is worthwhile to take a closer look at it. Take your time; so many photos and so many stories cannot be summed up in a single article.

your artwork is very incredible !!!

I recently came across your blog and have been reading along. I thought I would leave my first comment. I don't know what to say except that I have enjoyed reading. Nice blog. I will keep visiting this blog very often.