When I first began to make the cloth and crochet dolls,
I though they would be soft toys for children.
I tried to make fun characters. I created the dolls that were in my mind.
They were developed and yet developing during the process of making them by trying techniques of patternmaking, sewing the textile design and all other details.
I found out that my dolls are being bought by adults for themselves.
I had been asked if they are for decoration and I didn't know the answer.
I feel that the people who bought them (some prefer to say they adopted them) became part of the creation process, like Christine Leventis and Sonia Kovitz.
The process usually continues after the sewing and embroidering are finished.
Taking their photos, writing about them and sharing everything here, at my flickr and at my shop , became part from the process of the creation.
The comments I receive help me to understand the personality and charracter of each one of them.
Often I have been told that they are weird, different, scary or sad. 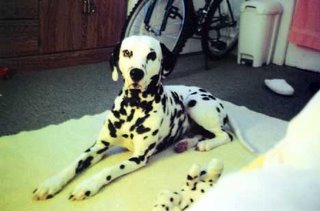 This dog used to be known as Romeo, Danielle's dog.
She adopted my first cloth couple , and wanted cloth dog to amuse them.
Unfortunately she had to put him to sleep a year ago, and asked me to make cloth Dalmatian for her and for them. I sent him last week, and she already wrote to me that his name would be romeo the second. This dog, that was known as the dog who wanted to show his teeth, adopted by Christine about two weeks ago.
He is going to Her best friend Rachel, who lost most of her teeth at accident, and while waiting to her new teeth was afried to smile.
Posted by Netamir

love the one growling....what personality they have!!