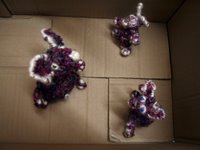 I had to put the dressed dog (who was bored enough already) and the red crafty dog in this box. It was their own box. the young crochet creatures thought they can hide in the box and go to San Francisco with the dogs.

The biggest crochet creature didn't like very much their sense of humor and he begged them to come back. 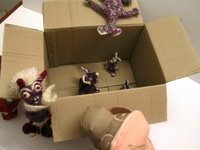 Meanwhile the dressed dog arrived,
and tried to find out what is the best way to get inside the box. 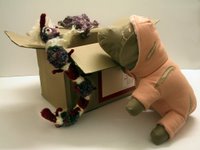 The winter worm was really sad for his leaving, She thought how fun it was sitting at the balcony and doing nothing together. They had a long conversation before he got inside, He promised to keep her at his hart, actually he had to say it over and over again. 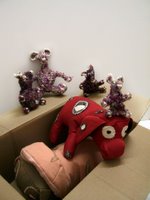 He got into the box and the red crafty dog came too. 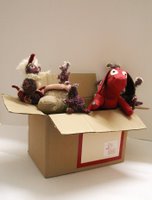 They all posed for the group photo.
The winter worm was yet sad for their leaving but she was also depressed because it was too rainy out side
She thought to her self that it probably will be easier to be a winter worm at the summer time.
Meanwhile there is a lot of things she had to take care off. 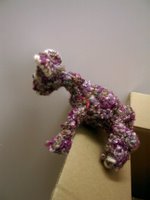 The red crafty dog and the dressed dog leave to San Francisco to meet their friend the dog with the crochet eyelid.
The winter worm try to take care of all the thing she had, but she decided it will be better doing them another time.
The crochet creatures go to catch a nap, not before the biggest one help me to close the box.
Posted by Netamir